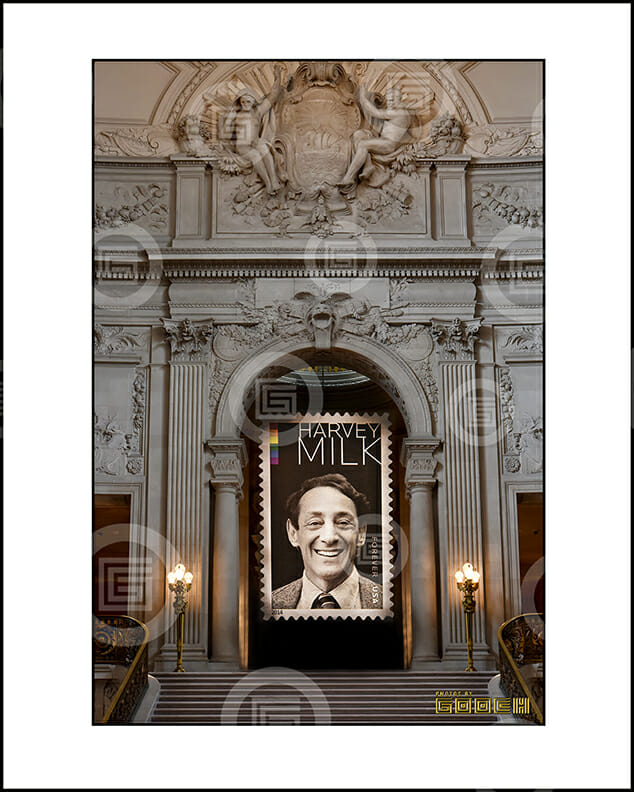 The First-Day-Issue dedication ceremony for the Harvey Milk Forever Stamp took place at the White House on 22nd May 2014. Four days later, it was unveiled at a special ceremony at San Francisco City Hall, attended by his nephew, Stuart Milk, and many who knew him. This image was captured at that ceremony.
order a print

Let this stamp remind us of the fundamental truth behind Mr. Milk’s message — that we all have a stake in equality. Let this stamp inspire a new generation to continue Harvey Milk’s legacy — to keep working toward a world where prejudice gives way to acceptance, where division gives way to unity, and where fear gives way to hope.
Deputy Postmaster General Ronald Stroman

The stamp image is based on a circa 1977 black and white photograph of Milk in front of his Castro street camera store in San Francisco taken by Daniel Nicoletta, with art direction of the stamp production by Antonio Alcalá.

The dreams uncle Harvey shared with me — for a world based not simply on tolerance, but on inclusion, not simply on an allowance for differences, but on the celebration of humanity’s diversity, are dreams for which he made the ultimate sacrifice. These dreams have a wonderful new emblem with the U.S. Postal Service’s issuance of the Harvey Milk Forever Stamp. The stamp represents a remembrance of the price paid by those that have gone before us in the struggle for equality and is also a graceful reminder that we each have a role to play in nourishing hope for those still struggling for acceptance, and that equality requires our vigilance, not only here, but across this globe that we all share.
– Stuart Milk

The public were invited to attend the 3:30 p.m. PT May 28 Harvey Milk Forever Stamp special dedication ceremony at City Hall in San Francisco.

to The Harvey Milk Center for the Arts. Originally dedicated to the Performing Arts, the building, overlooking beautiful Duboce Park, was headquarters for the Performing Arts Division of the Recreation and Park Department since its construction in 1954. It is home to the Young People’s Teen Musical Theatre Company and the Harvey Milk Photo Center.

Who was Harvey Milk?

Harvey Milk (1930-1978) was a visionary leader who became one of the first openly gay elected officials in the United States when he won a seat on the San Francisco Board of Supervisors in 1977.

Milk’s achievements gave hope and confidence to the Lesbian, Gay, Bisexual and Transgender (LGBT) community in the United States and elsewhere at a time when the community was encountering widespread hostility and discrimination. Milk believed that government should represent all citizens, ensuring equality and providing needed services.
His political career was tragically cut short less than a year after he took office in California when he and San Francisco Mayor George Moscone were assassinated on Nov. 27, 1978.
In 2009, Milk was posthumously awarded the Medal of Freedom by President Barack Obama.
Learn more
error: This content is protected.